Vassar Brother’s Hospital has a long, rich history dating back to 1886 and with it, an equally impressive list of visionary stewards who have served as chairpersons of their Board of Trustees. The Foundation recently chose to honor their contribution by installing a custom wall panel that includes the names and dates of service of the 44 men and women who have served the hospital. The design includes space for another 28 leaders to take them far into the future as our health care needs grow. 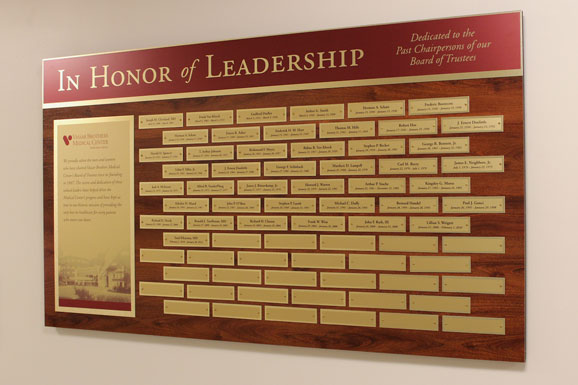 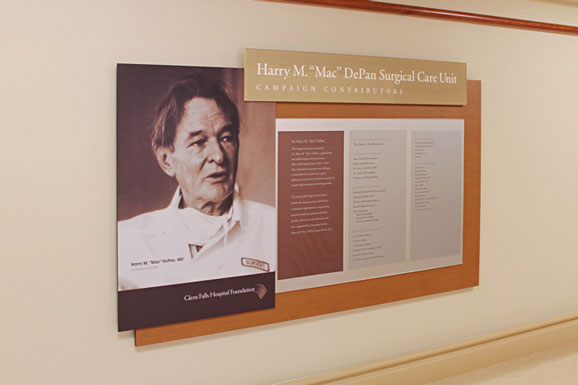 Glens Falls Hospital Foundation recently chose Timely Signs to assist them in the development of a donor recognition system for their new Surgical Care Unit. The unit was to be dedicated to the late Dr. Harry M. “Mac” DePan, a Surgeon at Glens Falls Hospital from 1954-1993. Glens Falls Hospital wanted to recognize Dr. DePan for his passionate and skilled service as a surgeon and for his unwavering commitment to healing patients in the region.

END_OF_DOCUMENT_TOKEN_TO_BE_REPLACED

There are some projects that we work on that really strike a “chord” for us here. Not only does it invigorate our love of design and the community but also it helps to remind us why we do what we do.

As many know, the music industry lost an icon this year when Levon Helm passed away. This event touched the whole community, international and locally, and also hit us here at Timely Signs. Especially for our President Paul Beichert who was not only a fan of his musical talents but had been working with the Levon Helm Studios on various projects for many years.

We were approached by Barbara O’Brien, manager of the Levon Helm Studios, to come up with a concept that would work in combination with their first fundraising effort, “Keep it Goin’”, to raise money to keep the studio doors open. The idea was to offer a commemorative t-shirt, an digital download of an exclusive recording of Levon Helm’s Song, “Drown in my own Tears”, and have the persons name engraved on a plaque that would be featured on an interior wall of the Levon Helm Studios.

When coming up with the concept, it began to take on more of a life of its own, more than just a simple dedication plaque.

The artist, Sheila Gilday, said about the project: “I was thinking about the concept for the artwork, and I wanted it to reflect who Levon was and how he chose to live his life. I decided to center the artwork on the mandolin, which was one of Levon’s instruments, but make it up individually out of mandolin picks as a mosaic of sorts. The various sizes and colors of the picks help to showcase the mandolin while giving it flow and energy. Then, in the spirit of “Keeping it goin’”, there are bursts of picks making their own individual rhythm, ebbing and flowing into the mandolin throughout multiple panels, giving the piece more power and making it whole. Similar to mandolin picks, we may be individuals but as a team we can make a great music & art together. And that was Levon.”

Paul Beichert plans on donating all the materials, fabrication and installation of the artwork in order to help with the project. “It’s an honor to be able to do this for Levon. I’ve been a fan of his music for the better part of my life. Every time I met Levon he was kind and generous with his time. He loved making music and easily inspired dedicated, life-long fans. We are so pleased that our company could play a small role in continuing his legacy.”

We will keep you updated on the progress of the project, but in the meantime, you can read more about the Keep it Goin’ fundraiser on the Levon Helm website. 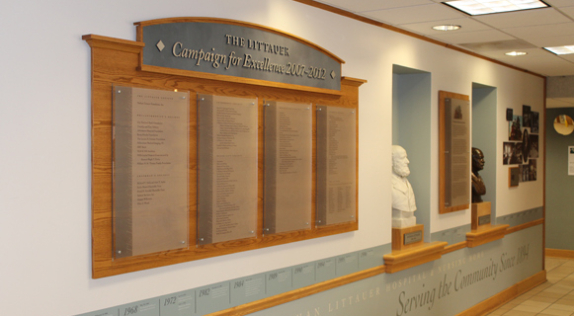 When Nathan Littauer Hospital in Gloversville, New York began their Capital Campaign in 2007, they contacted Timely Signs to help with planning a recognition panel to acknowledge donors. After a site visit, we found that this organization had a rich and interesting history dating back to 1894.

In their main lobby were statues of their founders Nathan and Lucious Littauer, but the way they were presented left much to be desired. Since the main lobby was where the planned recognition panel was to reside, we naturally felt that presenting the capital campaign in the context of the history of the hospital would be both fitting and visually compelling.

We took our cue from the existing oak pedestals for the statues and created a design using oak trim and backer panels. We suggested suitable paint colors and provided instructions to the hospital facilities department who handled the wallpaper removal and painting which helped reduce cost. The recessed wall areas where the statues rest were painted an accent color to highlight their importance. Etched stainless plaques were installed on the oak bases with the founders’ names as well as decorative lettering on the wall. Between the two sculptures is a panel that outlines the story surrounding the formation of the hospital. To the right is a collage of historical images and to the left is the capital campaign donor panel. Along the bottom of the display is a timeline of key events in the hospital’s history that ties the entire wall together.

I was introduced to Timely Signs three years ago.  It took just one on-site meeting with Joe and Paul, followed by their initial draft proposal for me to realize that Nathan Littauer Hospital and Nursing Home had found a company that understood the story we wanted to tell.  Since designing and installing our capital campaign donor wall, I have entrusted Timely Signs to create additional donor and general signage for the entire organization. Timely Signs does not subscribe to “same size fits all” approach to signage development.  Each Littauer project requires a design that fits the décor of a department while adhering to an organizational-wide interior design concept.  I heartily endorse the work of Timely Signs.

See Below for Additional Photos or visit our Portfolio page. 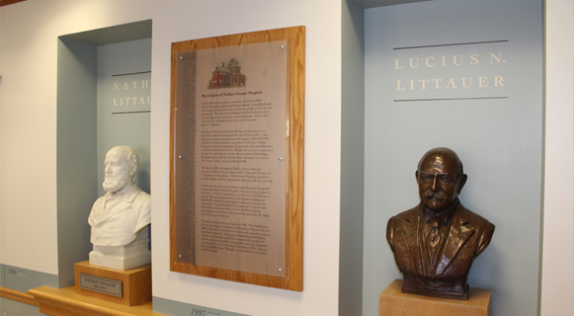 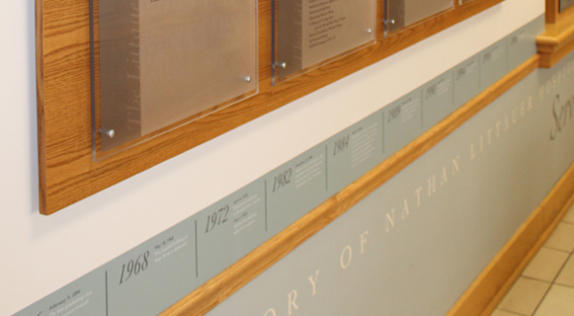 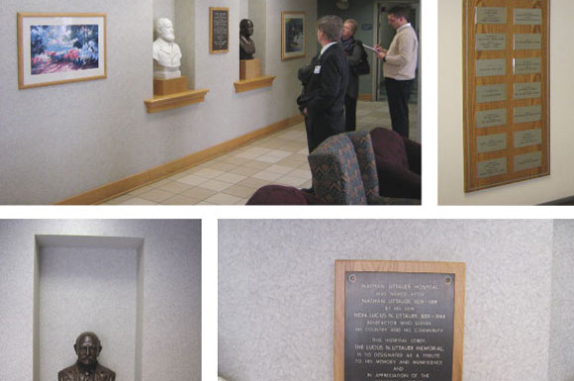