There are some projects that we work on that really strike a “chord” for us here. Not only does it invigorate our love of design and the community but also it helps to remind us why we do what we do.

As many know, the music industry lost an icon this year when Levon Helm passed away. This event touched the whole community, international and locally, and also hit us here at Timely Signs. Especially for our President Paul Beichert who was not only a fan of his musical talents but had been working with the Levon Helm Studios on various projects for many years.

We were approached by Barbara O’Brien, manager of the Levon Helm Studios, to come up with a concept that would work in combination with their first fundraising effort, “Keep it Goin’”, to raise money to keep the studio doors open. The idea was to offer a commemorative t-shirt, an digital download of an exclusive recording of Levon Helm’s Song, “Drown in my own Tears”, and have the persons name engraved on a plaque that would be featured on an interior wall of the Levon Helm Studios.

When coming up with the concept, it began to take on more of a life of its own, more than just a simple dedication plaque.

The artist, Sheila Gilday, said about the project: “I was thinking about the concept for the artwork, and I wanted it to reflect who Levon was and how he chose to live his life. I decided to center the artwork on the mandolin, which was one of Levon’s instruments, but make it up individually out of mandolin picks as a mosaic of sorts. The various sizes and colors of the picks help to showcase the mandolin while giving it flow and energy. Then, in the spirit of “Keeping it goin’”, there are bursts of picks making their own individual rhythm, ebbing and flowing into the mandolin throughout multiple panels, giving the piece more power and making it whole. Similar to mandolin picks, we may be individuals but as a team we can make a great music & art together. And that was Levon.”

Paul Beichert plans on donating all the materials, fabrication and installation of the artwork in order to help with the project. “It’s an honor to be able to do this for Levon. I’ve been a fan of his music for the better part of my life. Every time I met Levon he was kind and generous with his time. He loved making music and easily inspired dedicated, life-long fans. We are so pleased that our company could play a small role in continuing his legacy.”

We will keep you updated on the progress of the project, but in the meantime, you can read more about the Keep it Goin’ fundraiser on the Levon Helm website.

May 30th Sign of the Week! Levon Helm Studios.

This Wednesday’s Sign of the Week is near and dear to our hearts. It is best described in the words of Paul Beichert, Timely Signs president, who designed and fabricated it.

“Back in May of 2011, just before Levon’s birthday bash concert at Ulster Performing Arts Center, Timely Signs wanted to present Levon with a special gift for his celebration. We’d been working with Barbara O’Brien, Levon’s manager for many years and created a variety of promo items and awards for special guests who attended his Midnight Rambles. Levon wanted a sign for his barn in Woodstock where guests and performers could pose for a photo op. With all the touring and the Rambles every weekend, the plans for this sign always seemed to on the back burner and a couple of years had gone by.

When I heard about the birthday bash show, we decided we should give him the sign as a small token of our thanks for the good times he’s provided to so many of us over the years. I presented the sign to him in his dressing room right after he walked off the stage and he just loved it. I’ll always remember that big smile on his face. He was so filled with joy that night. That’s the Levon Helm I’ll always remember……” 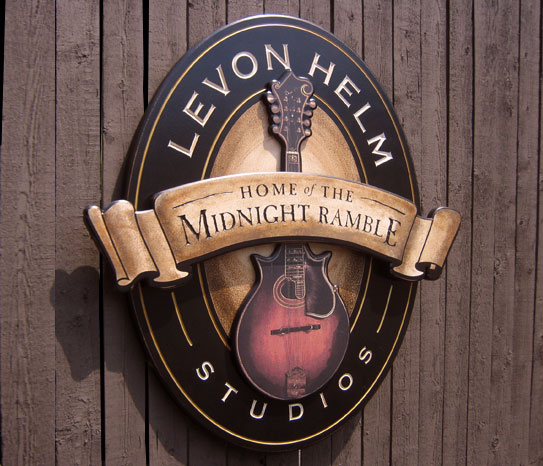